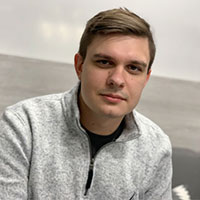 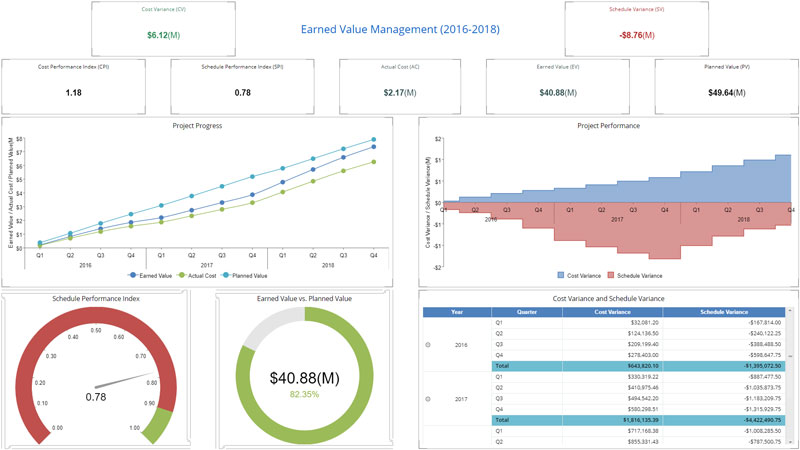 KPIs associated with effective Project Management play a critical role in the planning, tracking, and completion of projects across many different industries.

While these KPIs can be dependent on the nature of the project being managed, four commonly reported KPIs are:

Analyzing the effectiveness of Project Management on these desired KPIs is more easily done with data visualization software. Custom reports and dashboards are a great way to communicate the success of these efforts to both internal and external stakeholders with differing levels of technical prowess.

Our new Wyn Enterprise sample offers an Earned Value Management dashboard for Project Managers across all industries. This sample showcases numerous KPIs for at-a-glance project progress tracking, as well as detailed visualizations for a complete project summary throughout the project’s lifetime.

Check out this sample with its variety of data visualizations to see how you can explore your own project management data.

The focal point of this dashboard is the center data visualizations. Both Project Progress and Project Performance are visualized by a line chart and area chart, respectively. They display this project’s data over time. Instead of looking at the project’s current state, these charts present a linear story of the data.

The Project Progress line chart displays all three of these values. We can see that, while the project has not yet reached its Planned Value, it has consistently exceeded its Actual Cost. Therefore, it is still profitable.

Schedule Variance, which is also displayed in the area chart, is the project’s Earned Value minus Planned Value. This number indicates whether you are monetarily ahead of schedule or behind schedule. Since the total Earned Value is $40.88M, and the total Planned Value is $49.64M, the project is significantly behind schedule. You can see that the Schedule Variance depicted in the area chart is negative throughout the entire life of the project.

Below our two charts, we have two gauges and a data table. The gauges act as a straight-forward means for demonstrating how the project has performed to date. For this example, we will use 1 as the target for the Schedule Performance Index and imagine Earned Value as a percentage of Planned Value.

The SPI gauge has a target of 1 because a project with an SPI of 1 would mean the project is on target monetarily. The Earned Value/Planned Value gauge tells us that our project’s value is only 82.35% of what its planned value was at the project’s start.

With this data broken down by month, the Project Manager can explore why each respective figure was abnormally high or low to identify associated causes.

Having this data broken down by month allows the Project Manager to explore why each respective figure was abnormally high or low to identify associated causes. While the data table is beneficial, it is not necessarily essential to a project management dashboard.

All KPIs located above the two primary charts on this dashboard are designed to show the essential data points driving the visualizations on the rest of the page. When used in tandem with each other, these numbers present key information that are used to calculate variances, indices, estimations, and more. The resulting amounts help keep the cost and schedule in check, and identify areas of improvement and causes of under-performance.

Are you interested in learning more about Project Management Dashboards? Try us out or request a demo to learn more about our data visualization offerings.

Watch an in-depth demo of Wyn, learn about our user portals, and create a report in seconds.

Stay up to date with the GrapeCity feeds.